In a nonbinding resolution, county legislators air their displeasures with the mask mandate and other pandemic restrictions.

Dr. Patrick O'brien of the Knox County Board of Health addresses county commission Monday night, with Dr. Martha Buchanan on the video screen above him.

In a meeting that sprawled well past midnight, Knox County Commission last night passed a symbolic resolution disagreeing with the pandemic mandates of the Board of Health and also appointed a citizen representative to that board.

The Board of Health also gained a new citizen representative: a Knox County health teacher.

The resolution has no legal impact on the regulations enacted by the Board of Health to combat the spread of the coronavirus, including the countywide face mask mandate and the 11 p.m. closing time for bars and restaurants that serve alcohol.

But it still served as a signal from Commission that it is unhappy with the authority of the board to set public health policy, as established by both state and Knox County law.

“My position on this resolution is going to be driven by just a fundamental belief that I have, and that is that appointed boards should not create law or mandates or ordinances or anything like that,” said Commissioner Richie Beeler, who was among the 8-3 majority voting in favor.

Beeler recently recovered from a serious case of COVID-19 that at one point put him in a hospital emergency room. But he said he agreed with many of the speakers during more than three hours of public forum Monday night who protested the health board’s power.

More than 20 local residents applied for the position after the opening was announced last week, but by the time that item on the agenda came up just before midnight, only eight remained in the audience to make their case. After debating whether to delay the appointment for a month, commissioners decided to go ahead and choose from among that group.

The selection ultimately went to Ani Roma, a health teacher in Knox County Schools and the owner of an event production company that specializes in outdoor competitions. After the vote, Roma said she thought her multiple roles as a teacher, parent and small business owner would serve her well on the board.

“I’m hopeful that I can be a positive contributing member,” Roma said. “I’m dedicated to listening to the community and being a voice.”

She declined to give an opinion on the board’s existing mandates.

Commission Chair Larsen Jay said that Roma should be able to take her newly created seat on the Board of Health as soon as its next scheduled meeting on Wednesday. “I see no reason she cannot participate immediately,” he said.

Before the meeting, supporters and opponents of the Board of Health rallied outside the City County Building, with supporters significantly outnumbered. They were most easily distinguished by who was wearing face masks and who wasn’t.

Inside, anyone without a mask was directed to the upstairs balcony of the Main Assembly Room by Public Building Authority security. Entering the building at all without a mask was a violation of the Board of Health’s countywide order, but PBA clearly was seeking to calm rather than inflame the already emotional crowd.

Commission arranged for a podium and microphone to be placed upstairs for the anti-mask contingent, but many of them still insisted on coming to the podium on the main floor to speak. None were stopped from doing so.

With more than 40 speakers signed up, at five minutes apiece, the public forum that begins each Commission meeting stretched for two hours before Jay took a break at 7 p.m. for scheduled zoning hearings. Those lasted about an hour, and public forum then resumed and ran past 10 p.m. 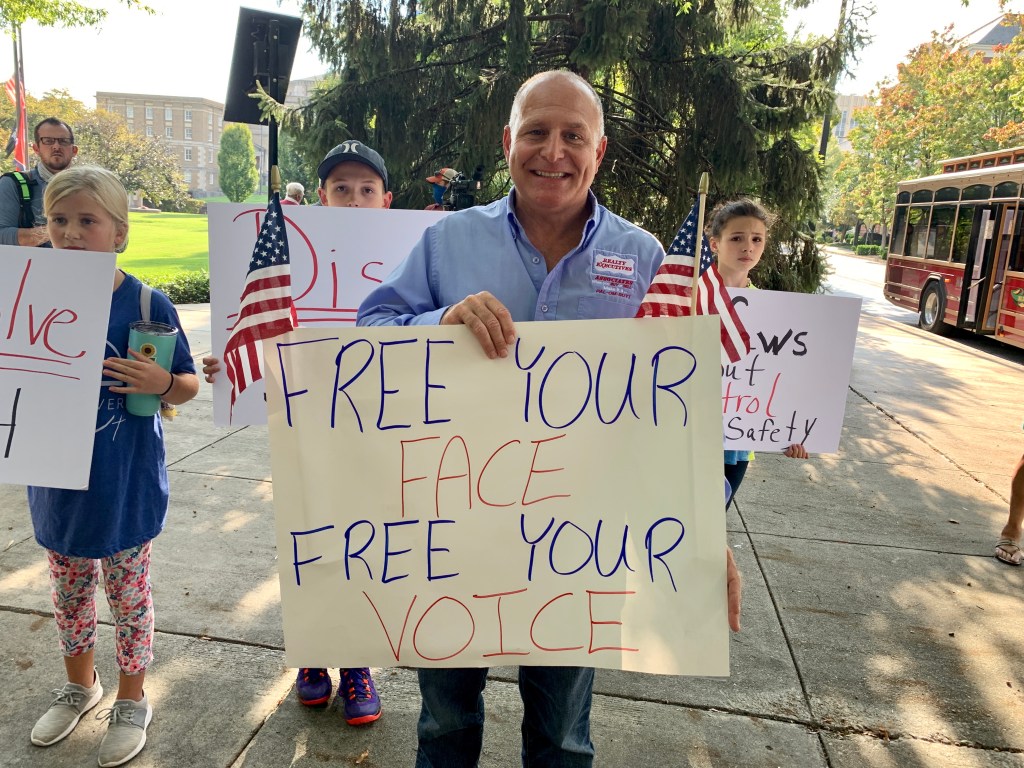 An anti-mask protester outside the City County Building Monday evening.

As at last week’s work session, those opposed to the Board of Health invoked a range of concerns: the economic consequences of pandemic restrictions, questions about the severity of the coronavirus, allegations that wearing face masks is itself unhealthy (a common refrain among COVID-19 skeptics, but one unsupported by science). Most prevalent was an objection to the “unelected board” — its members are appointed by County Commission — setting countywide policy.

“This is about the democratic process, the board having powers to legislate without checks and balances,” said audience member Kim Sprague. “It’s not about the credentials of the health board or their expertise.”

Several attendees also spoke in support of the board and its efforts. Among them was music promoter Ashley Capps, founder of A.C. Entertainment and the Bonnaroo music festival. He said that his industry has been shut down worldwide, not by health regulations but by the pandemic itself. National and international tours are impossible to plan with COVID-19 outbreaks continuing to proliferate.

“We want nothing more than for it to return and return fast,” Capps said. “But it’s not that easy. We need crowds of people to be able to come together again, hundreds of people — thousands, in some instances — in order for our business to return to normal. But we also need the assurances that they aren't risking their health and that our employees aren't risking their health to do business.”

Also addressing Commission was Annabel Henley, program director for women’s health at the Knox County Health Department. During the pandemic, she has been working on the department’s COVID response team. She urged commissioners not to undermine the department’s work.

“I would invite you to come and sit with us,” Henley said to the commissioners. “See what we see and hear what we hear. You can sit with me, I'll be happy to invite you. Maybe you need to talk to the families of people who've lost loved ones or are experiencing long-term effects of this disease.”

The Health Board Speaks

Once public forum ended, Commission turned to the proposed resolution expressing disapproval of the Board of Health’s authority and regulations. It was proposed by commissioners Justin Biggs and Kyle Ward, in place of a more drastic measure some commissioners were contemplating to dissolve the board entirely.

The resolution says that Commission wishes to “express its desire” that the board not enact any regulations more stringent than those established by Gov. Bill Lee in the statewide Tennessee Pledge pandemic plan. It also asks that Knox County residents not face criminal sanction for refusing to abide by health orders (which is a Class C misdemeanor under state law, punishable by a $50 fine and 10 days in jail). 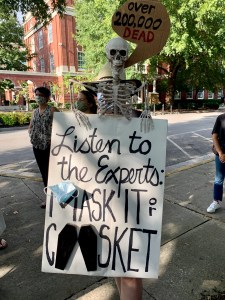 A supporter of the Board of Health's regulations outside the City County Building.

Dr. Martha Buchanan, director of the Knox County Health Department, appeared via video to assure commissioners that not a single citation or fine has been issued since the Board of Health issued its mask mandate in July.

“No one has been fined, cited, arrested for not wearing a mask,” she said. “That hasn’t happened.”

Dr. Patrick O’Brien, a member of the Board of Health who is an emergency room physician and an Air Force colonel, also attended Monday’s meeting to respond to commissioners’ questions and concerns.

Both O’Brien and Buchanan noted that the Board of Health had not been involved in the response during the first three months of the pandemic, which included the county’s most stringent shutdown orders. The board was thrust into the role in June after the Knox County Law Department opined that it should be taking the lead rather than Buchanan.

“The thing I would just say is we are trying as the Knox County Board of Health to achieve something that is for the common good, which is public health,” O’Brien said. “It is not an individual thing, it is all of us. And by all of us doing certain things that help all of us, such as wearing the mask.”

But Biggs said his concern was broader than regulations enacted to date. He said the pandemic had highlighted the powers of the Board of Health, which were established decades ago by state law but have not been called upon in this way before. Biggs suggested that the authority under the law was so expansive that the board could decide to ban sugary drinks or even guns in Knox County, if it judged them a health threat.

“Basically, there’s no limitation on the Board of Health,” Biggs said.

Commissioner Terry Hill said that if Commission wants to do something about that expansive authority, it should take stronger action than a symbolic resolution. She attempted unsuccessfully to postpone the resolution indefinitely, on the grounds that it was meaningless.

Before Commission finally voted on the resolution around 11:30 p.m., Buchanan read a statement defending herself and her department. She said that in her 14 years as county health director, she has always worked to take the least disruptive actions possible while protecting public health.

“We can insert politics and erase public health expertise from this process,” Buchanan said, “but doing that won’t erase the virus or its very real impact on Knox County.”

Commission then voted to approve the resolution, with Biggs, Ward, Hill and Beeler voting in favor along with commissioners Randy Smith, John Schoonmaker, Charles Busler and Carson Dailey. Voting against were Jay and Commission’s two Democrats, Dasha Lundy and Courtney Durrett.

The Commission meeting finally wrapped up just before 1:30 a.m.