With a crowd of anti-mask protesters cheering them on, County Commission weighs changes to the Board of Health.

protesters not wearing masks were directed to sit in the balcony.

The balcony in the Main Assembly Room of the City County Building is rarely occupied during public meetings, even with the seating restrictions put in place in the venue’s lower level during the COVID-19 pandemic.

Uncertainty on Commission about how much to restrict the board's powers.

But the upstairs space was packed with more than 100 people Monday evening for Knox County Commission’s monthly work session. They showed up to urge commissioners to dissolve or otherwise limit the powers of the county’s Board of Health.

They mostly sat upstairs because that’s where Public Building Authority security officers directed anyone who entered the building without a face mask, which is required in public indoor spaces by one of the Board of Health’s orders.

After more than an hour of public forum in which those attacking the health board’s pandemic mandates greatly outnumbered those supporting them, commissioners debated two resolutions that would affect the board. Both will be up for further discussion and final votes at the Commission’s regular monthly meeting next Monday, Sept. 28.

The first would add a citizen representative to the Board of Health, which is currently made up of six medical professionals plus County Mayor Glenn Jacobs and a representative from Knox County Schools.

Commissioners unanimously recommended that resolution, which was sponsored by at-large Commissioner Justin Biggs. But they turned down Biggs’ proposal to go ahead and name restaurateur Randy Burleson, owner of Aubrey’s and several other local eateries, to the position.

“I feel like we need a citizen on the board, I just want to make sure that everybody has an opportunity,” 9th District Commissioner Carson Dailey said.

Commission will accept applications from interested citizens this week and vote on the selection next Monday. Any registered voter in Knox County is eligible, although under state law the position cannot be filled by anyone who is a health provider or the spouse of a health provider.

Applicants for the position should submit a letter to the Commission office detailing their interest, background and qualifications by noon on Friday, Sept. 25. (You can find contact information on the Commission website.)

Commissioners were less decisive about another resolution, sponsored by Biggs and 4th District Commissioner Kyle Ward, which would attempt to limit the board’s ability to enact health restrictions.

The resolution asks that any actions of the Board of Health be “limited and controlled” by Gov. Bill Lee’s statewide executive orders, and also declares that Knox County should not cite, arrest or otherwise prosecute anyone for violating any orders of the board.

The volunteer board, which normally meets only quarterly, had been on the sidelines during the early months of the pandemic. But in June, the county Law Department opined that board should be in charge of setting policy for the county’s response. Since then, it has instituted a countywide mask mandate for indoor public places, reduced the number of people allowed to gather in one place and set a curfew of 11 p.m. for bars and restaurants that serve alcohol.

Commissioners moved the resolution forward to next week’s meeting without any recommendation. It is not clear whether the resolution as written actually accomplishes what it sets out to do.

But Kevin Hill, one of the organizers of the anti-Board of Health protesters, said after the vote that he counted the motion without recommendation as a win. He and others who spoke at public forum urged Commission to abolish the board outright rather than try to fence in its authority. Hill said he thinks Biggs and Ward’s resolution is legally suspect and doesn’t go far enough.

“Our whole goal was to get rid of this resolution, kill it, and move them toward dissolving (the board),” he said. “So the fact that it got paused gives us breathing room in the course of the next week to continue to make that case individually.”

The meeting began on a somber note with a personal account from 8th District Commissioner Richie Beeler, who recounted his own recent experience with COVID-19. Beeler tested positive for the virus a few days after Commission’s Aug. 17 work session. 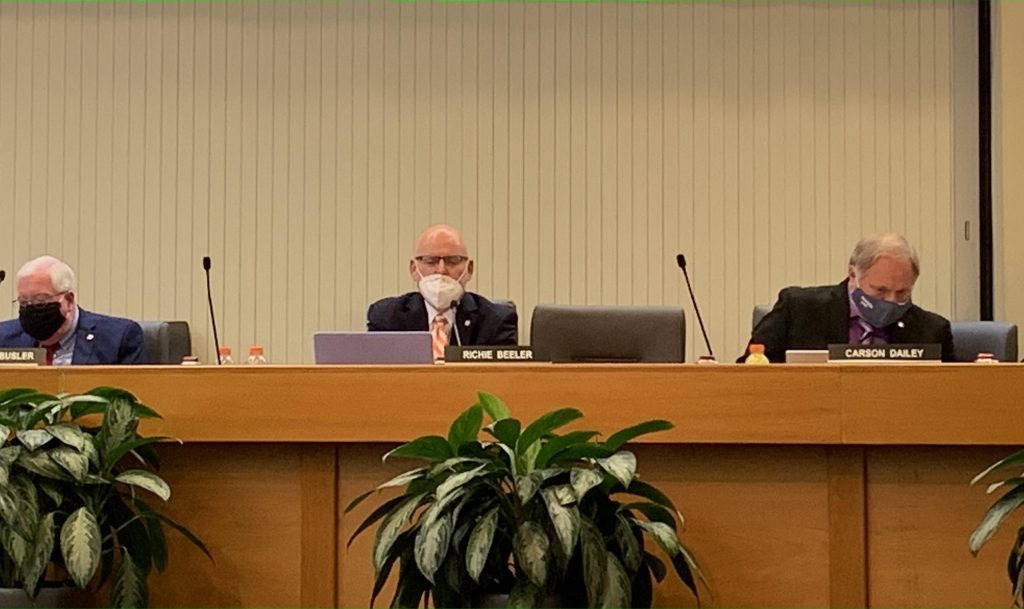 “I do just want to, from my own personal experience, take the time to say that this virus is a serious issue,” he said. “I became very, very sick. I don’t have any underlying health conditions, any kind of compromised respiratory issues or anything like that. But I became very sick, and Aug. 27 I was taken to the E.R.”

Beeler said with treatment he was able to go home that day, and his condition began to improve soon after. But he said he was struck during his emergency room visit that there were six people he knew personally who were all in the same hospital with COVID-19. A few days later, Beeler’s father was also hospitalized with the disease.

“I've never seen a time when I had seven people in my circle of friends who were hospitalized with the flu,” he said. “So I would just say, this is not the flu.”

Still, during later discussion, Beeler said he supported the proposal to limit the Board of Health’s authority.

“It is my personal belief and conviction that decisions — even those made in the interest of public health — if they have a profound effect on the economy and on business, I believe those should be executive and legislative decisions,” he said. “With health professionals and maybe others acting in an advisory capacity, but not unilaterally making those decisions.”

Ward, who is in his first month as a county commissioner, said his goal with the resolution was primarily to limit the county’s liability. Both Jacobs and the county Law Department have warned that actions taken by the Board of Health could lead to costly lawsuits.

“I want to protect the county, the citizens and taxpayers, to reduce the amount of liability that we have as a county,” Ward said. “So this way we’re not getting sued left and right for decisions that an appointed board has made.”

Law Director David Buuck told commissioners that the resolution, by adopting only state-level restrictions, would shift any potential liability to the state.

But the wording of the resolution seems to leave that ambiguous. It has four action items:

The Board of Health has already adopted the governor’s Tennessee Pledge guidelines and then adopted further restrictions on top of them. Lee’s executive orders permit the six Tennessee counties that have their own health departments to set their own pandemic restrictions. They also allow any county in the state to set face mask restrictions.

Asked about that discrepancy after the meeting, Buuck said, “But how can the counties do it? My thing is, it needs to be done by the elected body.” 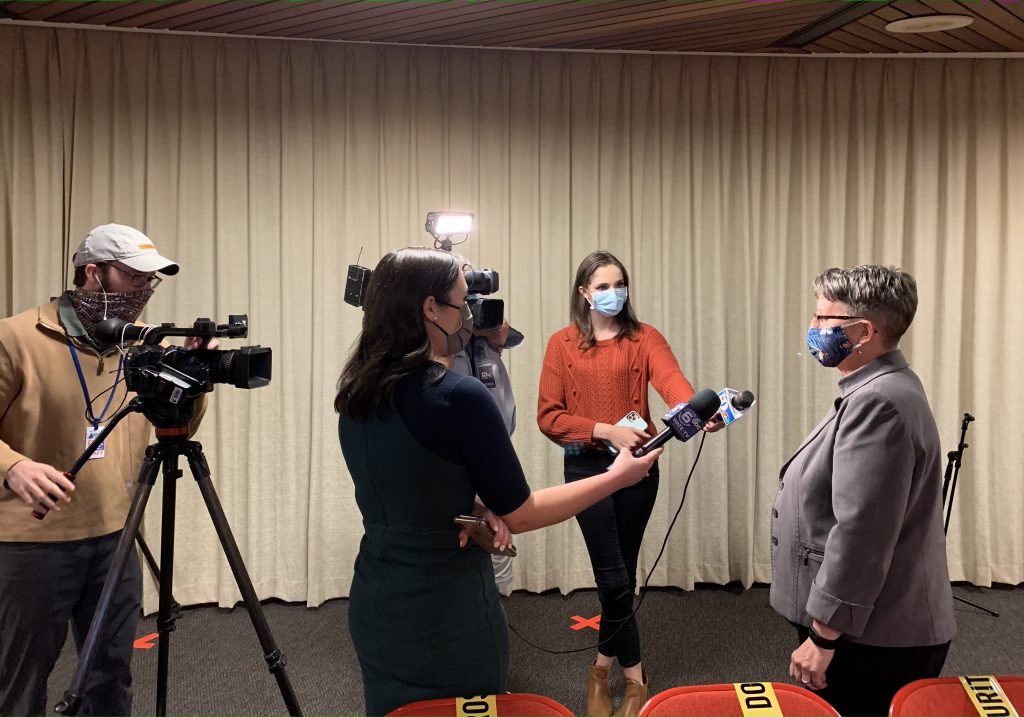 But it was Buuck’s predecessor and former boss, Bud Armstrong, who just three months ago informed the Health Department that all policy decisions have to come through the Board of Health.

“I can only set policy through the board,” Health Department director Dr. Martha Buchanan told commissioners in response to a question about her own authority. “That’s the difference that was explained to me previously by Mr. Buuck’s predecessor and Mr. Buuck.”

After the meeting, Buuck said that he had had to write the resolution quickly, trying to satisfy different directions from Biggs, Ward and Jacobs.

“That was my hurry-together, do something for three people,” he said. “And it needs refining.”

Referring to the provision stating the county wouldn’t enforce health orders,  Commission Chair Larsen Jay asked if it set a good precedent for Commission to declare that it did not want a specific law enforced.

“We are saying we don’t want to follow the law,” he said.

Buuck replied that Knox County Sheriff Tom Spangler has already said he does not want to enforce Board of Health orders. And he said that if the City of Knoxville proceeds with enforcement of the orders inside city limits, the city rather than the county would be liable for any lawsuits (even though the city would be enforcing a county order).

Some commissioners questioned how the Board of Health could enact criminal penalties. But that is actually a function of state law, which makes violation of any health order a misdemeanor.

Jay ultimately made the motion to send the resolution on without recommendation, saying there were questions still to answer.

Meanwhile, Buchanan said in an interview after the vote that she hopes people understand the Board of Health and Health Department are trying to keep the community safe in the midst of a global pandemic.

“I do have concern over who makes those decisions,” she said. “I think they certainly need some medical expertise, and we have that on the Board of Health. I think it will be important to maintain some sort of public health and medical expertise, to provide important feedback and advice for Commission or the mayor or whomever.”