School Board Approves Budget With Cuts

The $503.8 million package is down from last year, with reductions in staff and minimal raises for teachers.

For the first time in nearly 30 years, the Knox County Board of Education Wednesday night approved a proposed budget that is lower than the one it passed the year before.

The coronavirus pandemic has walloped the sales tax revenues that make up one-third of school funding.

“We’ve had to face some tough decisions, none of which I’m happy about,” said Superintendent Bob Thomas, who said the last time the school system confronted a year-over-year decrease was during the recession of 1991-92. “We know the budget proposal before you does not meet all of our needs, and it's very disappointing.”

The $503.8 million spending plan for 2020-21 is down by nearly $3 million from this year’s $506.7 million budget, but the shortfall from what the school system originally anticipated for next year is much larger.

As recently as March, Knox County Schools officials were projecting a revenue jump of $21.6 million in the 2020-21 budget, which would have been a 4.2 percent increase over the current year.

“It looks dramatically different than what it did two months ago,” said Ron McPherson, the district’s chief financial officer.

The difference, of course, is the coronavirus pandemic that has upended the global economy and cratered anticipated sales tax revenues, which make up about one-third of the school system’s budget.

The pandemic’s effects were readily apparent even in the form of Wednesday night’s called school board meeting, which was held in the 1st Floor conference room of the Andrew Johnson Building.

It was the first in-person meeting the board has held since March, and protocols included wide spacing between board members at the U-shaped table and between a limited number of chairs provided for administration officials and the media. Overflow seating, also widely spaced, was available for members of the public in the lobby just outside the meeting room, where the meeting was livestreamed on a TV screen. Audience members wore cloth face masks; board members took theirs off during the meeting so that they could speak more clearly.

‘Nobody Likes This Budget’

But the pandemic was most obviously present in the budget itself, which represents a retreat after significant increases last year in salaries and capital projects.

Still, it passed on an 8-0 vote after two and a half hours of discussion and debate. (Board member Tony Norman was absent.)

A proposal from board member Mike McMillan to strip out a promised step increase for teachers was defeated, as was an effort by board member Evetty Satterfield to restore $120,000 in funding for the system’s magnet programs.

The school system is facing some fixed increases from the current budget including the step raise for teachers and a projected $4 million commitment to restore the district’s fund balance after revenue declines this spring. It has had to scrabble to find savings and make about $4.4 million in direct cuts from the current year, including 20 positions in the Central Office and across the system.

The district’s 375 year-round employees — who include principals and senior administrators along with Thomas himself — will have a five-day unpaid furlough, which will save about $700,000. And all employees will have to cover expected increases in health insurance premiums, rather than the school system paying most of them. (There was some relatively good news on that front last night — McPherson said the increase looks likely to be closer to 2 percent than the 5 to 7 percent he had originally expected.)

Among the initiatives the school system had hoped to fund that had to be left by the wayside were an across-the-board salary raise (separate from the step increase, which is based on years of service) and new mental health services for students.

“This year we’re taking a step backward, and I don’t like it,”  Thomas said.

McMillan, a former teacher himself, proposed eliminating the step increase, which is projected to cost about $4 million next year.

“What bothers me is when I run into my neighbor or someone I know that’s lost their job,” said McMillan, who represents largely rural East Knox County. “It’s kind of hard to explain, from my perspective as a board member, ‘Why did certain teachers get raises when I don’t even have a job, and I’m a taxpayer.’”

He also suggested there was some resentment against teachers who have had the last few months off work with limited professional responsibilities. (Many teachers did engage with students online, once the district allowed them to, but they weren’t supposed to teach any new material.)

McPherson said the amount of the step increases vary widely by years of experience, but the average for teachers without master’s degrees is about $950 a year, which would be about $18 a week.

Board member Patti Bounds, also a retired teacher, reminded McMillan that the school system has an agreement with the Knox County Education Association that includes step increases. The agreement is nonbinding, under the state’s rules — passed under former Gov. Bill Haslam — that restrict the power of teachers’ associations. But Bounds said the “collaborative conferencing” allowed by the law was still important to maintaining teacher trust and morale.

“It has larger ramifications than just a raise, it’s also about how we work as a system,” she said.

And board member Jennifer Owen, another former teacher, noted that that agreement also called for 4 percent annual salary increases — a mark the district has hit only once, last year, since the agreement was reached in 2013.

“That 4 percent each year was so that we could maybe eventually catch up with those surrounding counties and then figure out how to actually stay there,” she said. “But we’ve only done that once.”

Satterfield found a little more traction in her passionate case for the school system’s magnet programs, which are slated for a $120,000 reduction as part of a broader $1 million in cuts for schools and programs across the county.

Satterfield, whose urban district includes many of the system’s magnet schools, noted that the proposed slashing of those programs three years ago sparked widespread community anger.

“Three years ago, magnet was on the chopping block,” she said. “And people spoke up about that. So I’m not really understanding why magnet continues to come up. It’s such a small amount of money in the bigger picture.”

She noted that Beaumont Magnet Academy last year received national attention and a grant from the U.S. Department of Education, and L&N STEM Academy in World’s Fair Park is now recognized as one of the top high schools in the state. 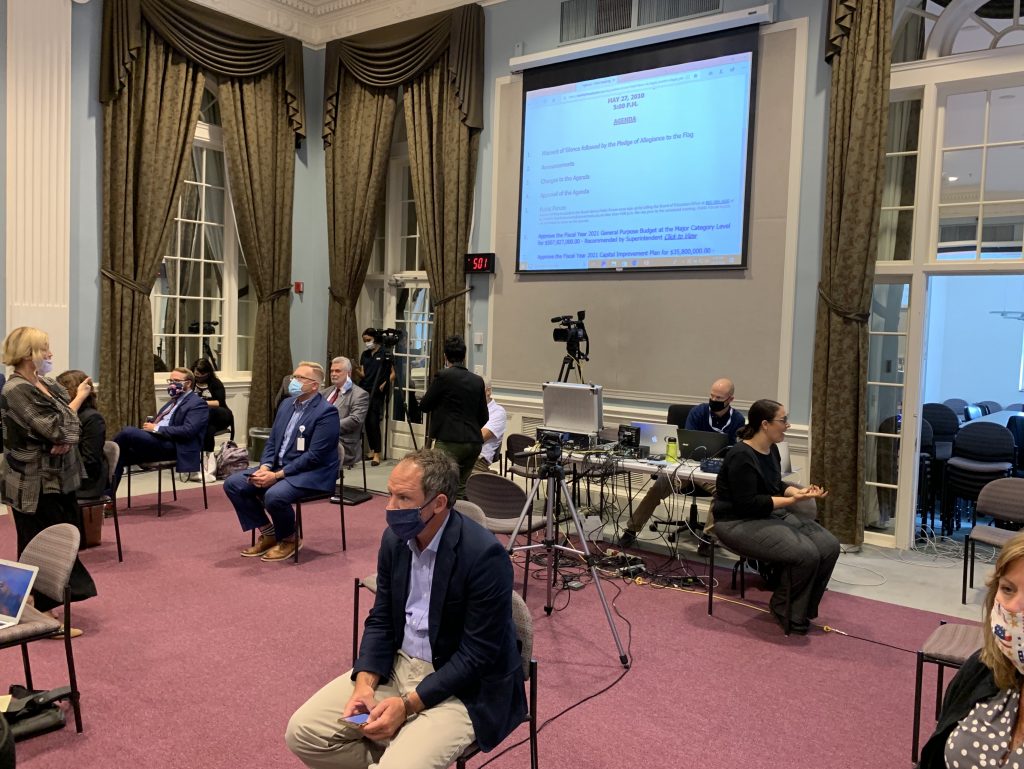 Thomas noted that both schools were receiving cuts of just $15,000 each in the proposed budget, and that L&N STEM Academy still had $10,000 left in unspent allocations from last year, making the impact in the coming year small. But he promised to look for ways to make up for that gap in budget.

Satterfield said she was concerned that cuts put into the budget would just be repeated in future years. Horn promised that anything cut this year would be the first things added back next year, assuming revenues improve.

“We look at those first and we see what we need to add back,” she said.

Ultimately the budget passed as originally presented. It will go next to County Mayor Glenn Jacobs for incorporation into the overall county budget, which he will present via video at 9 a.m. Monday, June 1. County Commission will then have until the end of June to study the funding plan and vote on it.

Several board members said that the budget dilemma highlighted to them the need for more support for schools, at state and local levels.

“Our property tax has not gone up,” board Vice Chair Virginia Babb said. “There is room in the sales tax to go up. We are in dire conditions that we have got to get more revenue. And it is not just a schools issue, This is a community issue. It is about our road systems, it’s about our sheriff, it’s about our Health Department.”

Similar arguments were made by two speakers during public forum at the start of the meeting, both members of the Knox County Education Coalition, an alliance of groups including KCEA, the local NAACP, Justice Knox and the League of Women Voters. They advocate for increased school funding and equity.

“There is enough money, if we’re willing to do the work,” said coalition member Lance McCold. “What’s the work? Asking for, fighting for the money our schools need so they can provide our children the education they deserve.”