'A Place for Original Ideas'

As Pilot Light marks its 20th anniversary in the midst of a pandemic, Jason Boardman reflects on the Old City institution he has built — and what comes next.

Jason Boardman, left, and leigh shoemaker in a still from a video shot the night before pilot light opened in May 2000.

It’s a strange time for a music venue to be marking a major milestone.

An intimate space dedicated to the enjoyment of live music contemplates its future.

Normally, Pilot Light in the Old City would celebrate its 20th anniversary by doing the same thing it’s done every week for the past two decades: bringing people together to revel in the shared experience of live, original music.

But like Knoxville’s other performance venues, the small club at 106 E. Jackson Ave. has been closed since March, with no reopening date yet set. To help defray expenses during the downtime and also to ensure the anniversary didn’t go unnoted, co-founder and proprietor Jason Boardman launched the club’s first-ever online fundraising campaign.

Starting with a modest $5,000 goal, through five days (as of yesterday afternoon) the GoFundMe effort had brought in $22,321. In an interview Monday, Boardman said the overwhelming response had laid to rest any doubts he might have had about whether people would miss Pilot Light in its absence.

“You get this just palpable, unbelievable show of support, like, ‘No, this is important,’” Boardman said. “The idea of, ‘Is this a good time to stop?’ just goes right out the door. It’s fantastic. I’ve been brought to tears many, many times.”

Pilot Light has always been more a community project than a business. Boardman has never taken a salary for his hours of toil — a day job writing and running software at McKay’s bookstore covers his living expenses — and most of the staff are volunteers, too. The club formally incorporated as a nonprofit in 2016, but it has functioned as one from the start.

“I joke about it,” Boardman said. “It has always been a ‘no profit,’ but it took so much work to get that extra ‘n.’”

Along the way, the no-frills club with a maximum capacity of under 100 people has nurtured a few generations of Knoxville bands, who can often get an opening slot for one of the many touring acts that come through or, just as often, on a multi-band bill with other locals.

“The Pilot Light is so important to the music community in this town, this region, and beyond,” said veteran local rocker Tim Lee, who has played the venue many times with his various bands. “Before all this hit, I was there multiple nights most weeks when I was around. I love going to multi-act shows, especially if I’m not familiar with the bands or artists. Even when it’s maybe not my cup of tea, there’s always something happening that’s cool on some level.”

Boardman arrived in Knoxville in the early 1990s, when downtown was approaching a cultural low ebb and the few places that regularly booked live bands tended to be noisy bars. The local music scene revolved around the Mercury Theatre on Market Square, at least until it closed in 1998.

“And then there was really I remember a period of a couple of years where it seemed like there was nowhere to do anything,” Boardman said. 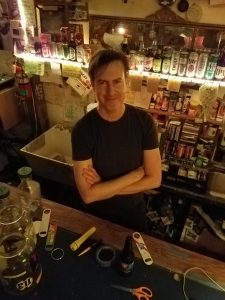 Jason Boardman in a recent photo behind the bar at Pilot Light.

He had friends who hosted house parties for touring punk bands and booked shows in whatever spaces they had access to — the Foundry, Tomato Head, various under-the-legal-radar venues in vacant buildings. But no place specifically designed for people who loved playing music and seeing live bands.

Sometime in early 1999, Boardman was talking with his friend Leigh Shoemaker about the venue shortage, and the conversation turned into one of those “Well, why don’t we do it” moments.

Their goals were modest: “Try not to go into debt, shoestring, so that if it doesn't work, we could just get out without it being debilitating,” Boardman said. “And so we looked around and found a spot, and not knowing at all what we were doing, signed a lease and started this thing we were going to try for one year. And here it is 20 years later.”

The space turned out to be fortuitous — a small historic building in the heart of the Old City that had most recently been home to a futon store. The one-story structure, just 35 feet wide and 65 feet long, belongs to a local family that has had it for generations.

“They are really into what we’re doing and are proud of it,” Boardman said. “We got lucky. That is it, right there. Because even if we were a success beyond our wildest dreams, that could have yanked the plug.”

Instead, Pilot Light has stayed plugged in and vibrant as downtown and the Old City have redeveloped around it. Boardman, Shoemaker and friends built out the basics themselves, installing bathrooms, a stage and a bar. (You can find a short video clip on YouTube of Boardman and Shoemaker hard at work with hammers and nails the night before the club hosted its first show on May 22, 2000.)

Somewhat to his surprise, Boardman now finds himself shepherding a local institution. It is one of the longest-running businesses in the Old City, which has seen abundant turnover in the past two decades.

“It’s bizarre that there are kids playing in local bands who for the entire time they’ve been alive, the Pilot Light has been there,” Boardman said. “Sometimes that can be aggravating, like, ‘You don’t realize this thing is really hard to keep open.’ … But in another way, I'm glad they don't have to think about it. Because it's a place that as far as they're concerned is never going to go away.”

All About the Music

From the start, Pilot Light has prioritized the experience of live music, both for performers and audiences. Even after 20 years of incremental improvements, the space is still fairly spartan, the seating is limited, the bar serves only beer in cans and bottles. But the sound and the mix are as good as anywhere in town and better than most.

“I wanted to create a situation where their performance experience was not compromised in any way,” Boardman said. “And really, that does not take a tremendous amount of technological effort. It’s really about attention.”

That made it stand out to touring acts early on. A 2002 Metro Pulse article quoted Moe Tucker, drummer for the legendary Velvet Underground, who had appeared at a Pilot Light show earlier that year. She said it was one of her two favorite clubs that she had played at on the tour.

“Both places are in the top two because the club owner cares about people coming to the show to hear music and not just drinking beer," she said.

Pilot Light is often referred to as an indie-rock or punk-rock club, but the approximately 4,500 acts that have played there cover a much wider spectrum, including jazz, African rock, electronic music and experimental music of all descriptions.

They include some bands who have gone on to play at much larger venues. One of the donations to the GoFundMe campaign came from Patrick Carney of the Black Keys, who played a few early shows at Pilot Light well before they were a top-line attraction at Bonnaroo.

In sorting through the endless emails he receives from bands looking for a place to play, Boardman said he looks for one quality in particular.

“I think the very first thing is originality, in their own terms,” he said. “It’s a place for original ideas.”

Local musician Gray Comer, who has played Pilot Light with numerous bands, said in an email, “If there's another venue in this country that has hosted a broader range of music (along with various other types of performance) than the Pilot Light, I'd be very surprised. The Pilot Light has always promoted the democratization of music, and has consistently given a voice and a stage to those who otherwise might not have one.”

But of course, all of that is on hold for the moment. Even as the online campaign has generated an outpouring of both financial and emotional support, the doors remain closed. The Phase Two guidelines for reopening businesses set by the Knox County Health Department that take effect today allow live entertainment to resume, but with distancing restrictions that would be difficult to implement in a space as intimate as Pilot Light: All groups of people would have to be at least 6 feet away from each other, and the performers on stage would have to be at least 12 feet from the audience.

“A lot of people are asking (about reopening), and I don’t have any good answers for them other than the fact that we’re not ready to do it,” Boardman said.

He’s planning to pull together the club’s staff next week and talk about their options. Even if the space can’t physically open for a while, he wants to reactivate it one way or another.

“I would like for us to be more actively engaged in achieving our mission, which is making interesting music and art and performance happen in Knoxville,” Boardman said. “All right, we’re into creative constraints. This is a new creative constraint. Let’s think of it that way.”

In the meantime, he can be assured that many people in Knoxville are thinking about Pilot Light and — for the first time in 20 years — missing it.

Susan Bauer Lee, Tim Lee’s wife and bandmate, summed up her feelings about the club in a Facebook post: