Knox County Commission’s 4th District stretches from established West Knoxville neighborhoods like Sequoyah Hills and West Hills through the suburban developments of more recent decades, along Northshore Drive to the Bluegrass community. Just under half the district is inside city limits.

A district where development and infrastructure dominate local concerns.

It is one of the most affluent Commission districts, with median household incomes in some areas reaching well above $110,000, double the overall county median. It is also traditionally Republican — in recent decades, it has had a Democratic county commissioner only briefly after the Black Wednesday scandal of 2007, when Finbarr Saunders held the seat until being ousted in 2010 by Republican Jeff Ownby.

Saunders went on to serve eight years on City Council, including a stint as vice mayor. Ownby went on to a small scandal of his own and a loss in the 2016 Republican primary to Hugh Nystrom, who currently holds the 4th District Commission seat and is in his second year as Commission chair.

Nystrom announced last year that he would not seek a second term, citing family obligations. That created an unexpected open seat and attracted interest from both Democratic and Republican candidates.

Some of the district’s older, more urban neighborhoods have been trending more Democratic in recent years. Sequoyah Hills has practically become a blue bastion on the local electoral map, and even areas around Rocky Hill have shown increasing swing tendencies. But the redder stretches to the west, including Ward’s Bluegrass base, provide a GOP cushion.

In 2016, Nystrom defeated Democrat Marleen Kay Davis by 689 votes, giving him a comfortable 58-42 percent margin in a relatively low turnout race. But in the March 3 primary, with Democratic turnout driven by a competitive presidential primary, Frommeyer (who had no Democratic opponent) logged 4,617 votes — more than Ward (2,803) and Broyles (1,794) combined.

Largely developed, the 4th District faces the challenges of a once largely rural area that has been rapidly subdivided for housing developments, which still mostly rely on an existing network of two-lane roads. Traffic, flooding, school crowding and other symptoms of suburbanization are among the persistent issues for local residents.

Ward and Frommeyer are both military veterans who relocated to Knoxville after leaving the service because their spouses have local ties. They both agree that development and infrastructure are top of mind for the district’s residents. But their personal and political paths have taken different courses.

Frommeyer noticed something the first time he went to vote in Knox County: In a lot of local races, there was only one name on the ballot.

“You get into the general election voting booth, and it's a bunch of Republicans running unopposed,” he said. “I just didn't want to vote for the Republican, so I would write my own name in.”

He would go home and tell his wife, Susan, “Maybe one of these times I ought to actually run.”

When he realized the County Commission seat in his own district would be on the 2020 ballot, he decided this year was the time. He said he’s running to give voters a choice — not just among parties but philosophies. The current Commission, he believes, is too deferential to County Mayor Glenn Jacobs and development and real estate interests.

“I think they just kind of rubber-stamp what Mayor Jacobs wants and they won’t say boo to him,” Frommeyer said. “The through-line for me is, look at the financial disclosures for those candidates, and almost all of them are funded by builders, developers, real estate interests.”

Frommeyer, who is 54 years old, was born and grew up in northern Kentucky. He enlisted in the U.S. Navy at age 20 and worked as a Russian linguist on arms control and other international issues. He got out after eight years of service and used his G.I. Bill benefits to go to law school, finishing a Master of Laws in international economic law at the University of Houston.

But after working for the Social Security Administration in Florida, he found himself missing the military and re-enlisted, this time as a Judge Advocate General for the U.S. Air Force. After 12 years of practicing military law, he was eligible for retirement. His service included overseas deployments to Qatar and Iraq, but he is careful to say he was not in the middle of any action — “I was in one of Saddam’s palaces at a computer, doing lawyer stuff.”

After leaving the military, he worked for three years in the nascent Consumer Finance Protection Bureau, created by Congress under former President Barack Obama. Then, having reconnected with a college sweetheart who was now an OB-GYN at Fort Sanders Regional Medical Center, Frommeyer found himself married, retired and relocated to Knoxville. He describes himself as a stay-at-home dad to his middle-school-age stepdaughter (he also has a son who is a student at the University of Tennessee).

He has been paying close attention to county government for the past year, as he contemplated and then launched his campaign, and he has a lot of concerns about the way it conducts business. He has written detailed thoughts on a campaign blog, where he has dug into issues including the influence of the homebuilders’ political action committee, taxes and sidewalks.

Overall, Frommeyer thinks monied special interests have too much sway in county government and often run roughshod over the interests of local residents and taxpayers. He is deliberately running a bare-bones campaign that is not requiring him to raise a lot of money.

“When you've got people raising legitimate concerns, and you're always siding with the developer to say, ‘OK, the developer’s gonna go ahead and he'll talk to you later,’ I think you’re abrogating your duty as a commissioner,” Frommeyer said.

He said that he is not anti-development but in favor of better planning. “I think it is not reasonable or responsible to approve the development without having thought through what happens on the other side,” he said. 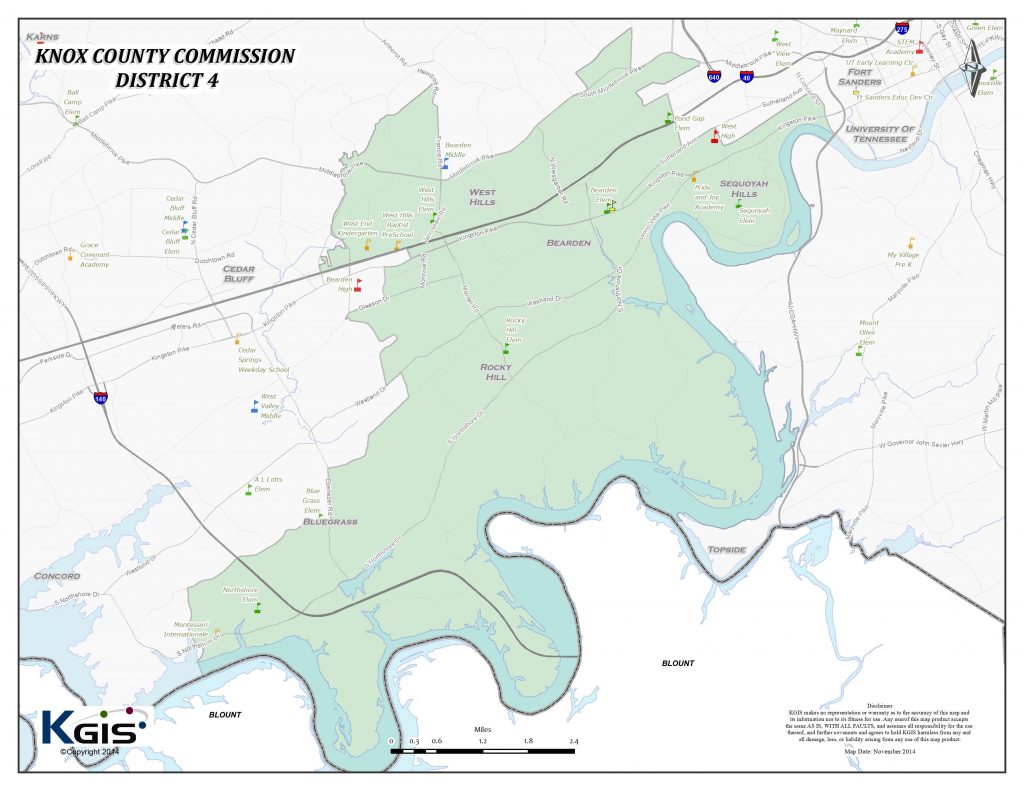 During Commission’s budget discussions last month, Frommeyer spoke during public forum to suggest Commission consider a 2-cent property tax increase, which he said would have provided enough money to give teachers a raise along with uniformed Sheriff’s employees.

“As much as I think the officers of the Sheriff’s department are underpaid, so are the teachers,” he said. “And I don’t believe the officers should be considered more important than the teachers.”

He said he realized that it might be unpopular to discuss a property tax increase in a county that hasn’t had one for 21 years.

“I’m going to have the courage of my convictions and propose it,” Frommeyer said. “Even if it’ll go down 10 to 1. It literally is a 2-cent proposal, but it also needs to be the start of a discussion about where tax rates need to be and funding the priorities.”

Ward is also an East Tennessee transplant. He grew up in Stamford, Conn., and went to Western Connecticut State University and St. Bonaventure University. He enlisted in the Air Force after college and was stationed at Langley, in Virginia, working in military intelligence.

He later was stationed at the Joint Special Operations Command (JSOC) at Fort Bragg, N.C. He served four years and two months in the Air Force, extending his contract so he could be deployed to Afghanistan.

“It was important to me that I deploy before I got out of the service,” Ward said. He worked in intelligence, tracking down “bad guys,” and was considering signing up for another four years.

“I was supposed to re-enlist when I was in Afghanistan, but my friend got killed in front of me,” Ward said. “When he got killed, I decided I needed to go home. I was a wild man at that point and probably would have had a similar fate if I wasn’t smart.”

He left the military in 2012 and met his wife soon after. She grew up in Knox County and graduated from Farragut High School, so they ended up relocating here. Ward worked in sales for Journal Broadcast Group (later E.W. Scripps), before eventually deciding he wanted to strike out on his own.

“She asked what I wanted to do, and I said I wanted to start a garbage company. She said, ‘I didn’t think I was marrying a garbage man,’” Ward said with a laugh. Still, the couple agreed that he could have five years to make a go of it.

“First year we were profitable, and we’ve been growing ever since,” Ward said. His company currently provides waste collection services to 2,500 houses.

Politics are in his blood, to some degree. His father was a local Republican official when Ward was growing up and the head of planning and zoning for the town. Ward said he had talked with his friend Erik Wiatr, a Realtor and an organizer of the local group Patriots of East Tennessee, about running for office. Wiatr is now his campaign manager.

They had been planning to run for the 4th District seat in 2024, assuming Nystrom would seek a second term. When the seat suddenly came open this year, they had to accelerate their plans.

In the primary, Ward was something of an underdog — Broyles had the support of Nystrom and many other establishment names. But he followed a determined gameplan of door-knocking, and raised enough money to be competitive. (Some of that support, as Frommeyer noted, comes from developers and homebuilders.)

“I went into this entirely green, I didn’t have any experience in politics,” Ward said. “Nobody would talk to me, to be honest, for the first two months. I couldn’t get a meeting with anyone.”

He acknowledged with a laugh that he gets a lot more phone calls returned since winning the primary. If he is elected next month, he will turn 35 the day before he takes office in September — which would make him the youngest member of County Commission.

Ward said he would emphasize economic development, education and infrastructure needs on Commission — all while keeping taxes low.

“We have an example about two and a half hours to our west of what happens when you don’t plan properly for expansion,” Ward said, referring to Nashville. “So one of the things in my mind is making sure that we’re responsible in providing the infrastructure that’s needed to support all the growth.”

He cited flooding in the Bluegrass area as a particular ongoing problem. Commission recently allocated about $1.5 million for new pump station at Bluegrass Lake, which the county hopes the city and the Tennessee Valley Authority will also help with.

Ward said his family has experience in construction and real estate and he understands the interplay between growth and infrastructure. He said a certain amount of density is important to maintain a mix of housing.