Knox County says it wants to do a better job of providing infrastructure for new development. Growth in the Gibbs community shows hard that is.

New developments in gibbs are within walking distances of schools and stores, but they lack connections.

Two proposed projects in a rapidly developing area of East Knox County are highlighting the challenges of providing infrastructure to support suburban growth.

The county lacks resources to build sidewalks and has limited what it requires of developers.

The developments, a subdivision and an apartment complex near Harbison Crossroads at the heart of the Gibbs community, are close to other subdivisions, to the commercial center at the intersection of Tazewell Pike and Emory Road, and to the Gibbs elementary, middle and high schools. Close, at least, on a map.

But at the moment, there are no good ways to travel between most of those locations except by car. That’s something local residents would like to see addressed.

“This is an area that’s in the planned growth area of the county,” community advocate Kevin Murphy said last Thursday during a meeting that included Gibbs residents, three county commissioners and representatives of county government and Knoxville-Knox County Planning. “It’s got three schools right there, it’s got a park right there, it’s got a built-up mixed-use area at Harbison Crossroads. There’s a lot of opportunities for something really good here.”

And yet, as the meeting Thursday at the county’s Engineering and Public Works complex showed, there is no easy way to follow through on those opportunities. Developers in Gibbs have failed to deliver on promises to provide sidewalks and other public amenities for the area, and the county simply doesn’t have the estimated $75,000 or so it would take to build them itself in the foreseeable future.

“We’re in the month where we’re passing a budget that has less money for everything,” said Commissioner Larsen Jay, who attended the meeting along with his colleagues Richie Beeler — who represents the area — and Justin Biggs. “To me, there’s not a chance I see (of) Knox County investing in infrastructure and sidewalks in this area in the next decade.”

County Commission has spent a lot of time in the past year and a half talking about planning and infrastructure. At a retreat last summer, commissioners identified the need to better match infrastructure with new growth as one of their top priorities. But that talk so far hasn’t produced much in the way of action.

A promised comprehensive updating of the county’s General Plan — last revamped in 2003 — has yet to materialize, after an amendment to its Growth Policy Plan was derailed in January by the Farragut Board of Mayor and Aldermen. The county estimated last year that it will take 40 years to bring existing infrastructure, including sidewalks, up to standards mandated by the Americans With Disabilities Act, never mind building new facilities.

Meanwhile, the county has been reluctant to require too much infrastructure investment by private developers who are building new subdivisions across the county. Despite lobbying from Bike Walk Knoxville and other pedestrian advocates earlier this year, Commission approved a new sidewalk ordinance that requires developers to build new sidewalks only in specific areas. And one of County Mayor Glenn Jacobs’ first acts on taking office in 2018 was to cancel a planned countywide sidewalk master plan. 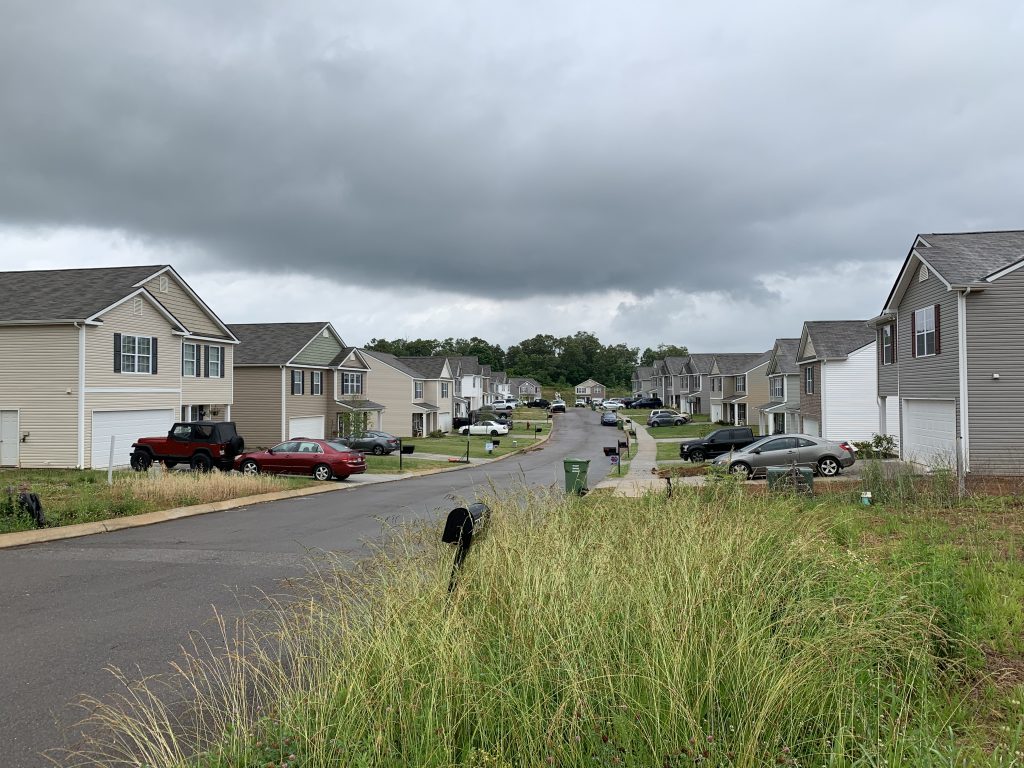 That means that no matter how easy it may be to draw connecting lines on a map between developments and public amenities or commercial centers, the political will and public resources to make them real have so far been hard to come by.

The Gibbs developments provide good examples. When Edwards Place subdivision on Thompson School Road was built in 2007, the developers were required by the Metropolitan Planning Commission (now the Knoxville-Knox County Planning Commission) to build sidewalks and other public amenities. But residents at Thursday’s meeting said that never happened and the original developer relinquished ownership before finishing the project. It is now on its third developer.

In the years since, the new Gibbs Middle School was built on property behind Gibbs High School on Tazewell Pike, which runs roughly parallel to Thompson School Road. The school complex sits tantalizingly close to the back end of Edwards Place, where a new 80-unit apartment development called Woodbury Place is under consideration this week by the Planning Commission.

Those new apartments, which have been recommended for approval by Planning staff, would be less than 1,000 feet from the middle school — but at the moment the only path between them will be nearly two and a half miles of roadway.

County and Planning officials at Thursday’s meeting said some small pieces of infrastructure could be required of the developers: a dedicated right-of-way at the back of the apartment complex, which could eventually be built into a path or roadway leading to the schools, and a section of sidewalk leading from Thompson Meadows out to Thompson School Road.

Jim Snowden, the county’s senior director of engineering and public works, said the county was also planning to build a missing section of sidewalk inside Edwards Place, using forfeited bond money from the developer that failed to build it in the first place. But with no sidewalks on the road itself, neither that nor the Thompson Meadows sidewalk would at the moment connect to anything.

Snowden also noted that connecting the subdivisions to the schools could create another issue: It would move them into the Parental Responsibility Zone, meaning there would be no bus service. That could be fine for the middle and elementary schools, but it would put high school students in the position of having to cross busy Tazewell Pike — which would probably mean needing to install a pedestrian crossing signal or a footbridge.

“I’m not trying to be Captain Doom and Gloom,” Jay told the community members at Thursday’s meeting. “It’s great (to have ideas), but there’s no commitment to invest in infrastructure on this scale, and there hasn’t been for some time.”

Murphy, an East Knox County resident who is a member of the Knox County Planning Alliance, which advocates for better planning and infrastructure investment, said in an interview after the meeting that he hopes county leaders will nevertheless see the opportunity to act now and get ahead of growth in the area.

“This is an area where cluster development and increased density make a lot of sense,” Murphy said. “But when you want more density, you require more infrastructure there to support that.”

CLARIFICATION: This story has been clarified to say that the county plans to build a missing section of sidewalk inside Edwards Place.