Looking for something uniquely local this holiday season? Here are a few of our favorite things from 2019.

Today officially kicks off the holiday shopping season, even though major retailers have already been running Black Friday specials all week. In keeping with the spirit of the day, and with our bias toward all things Knoxville, here’s a round-up of some fine original local wares created or produced in 2019. 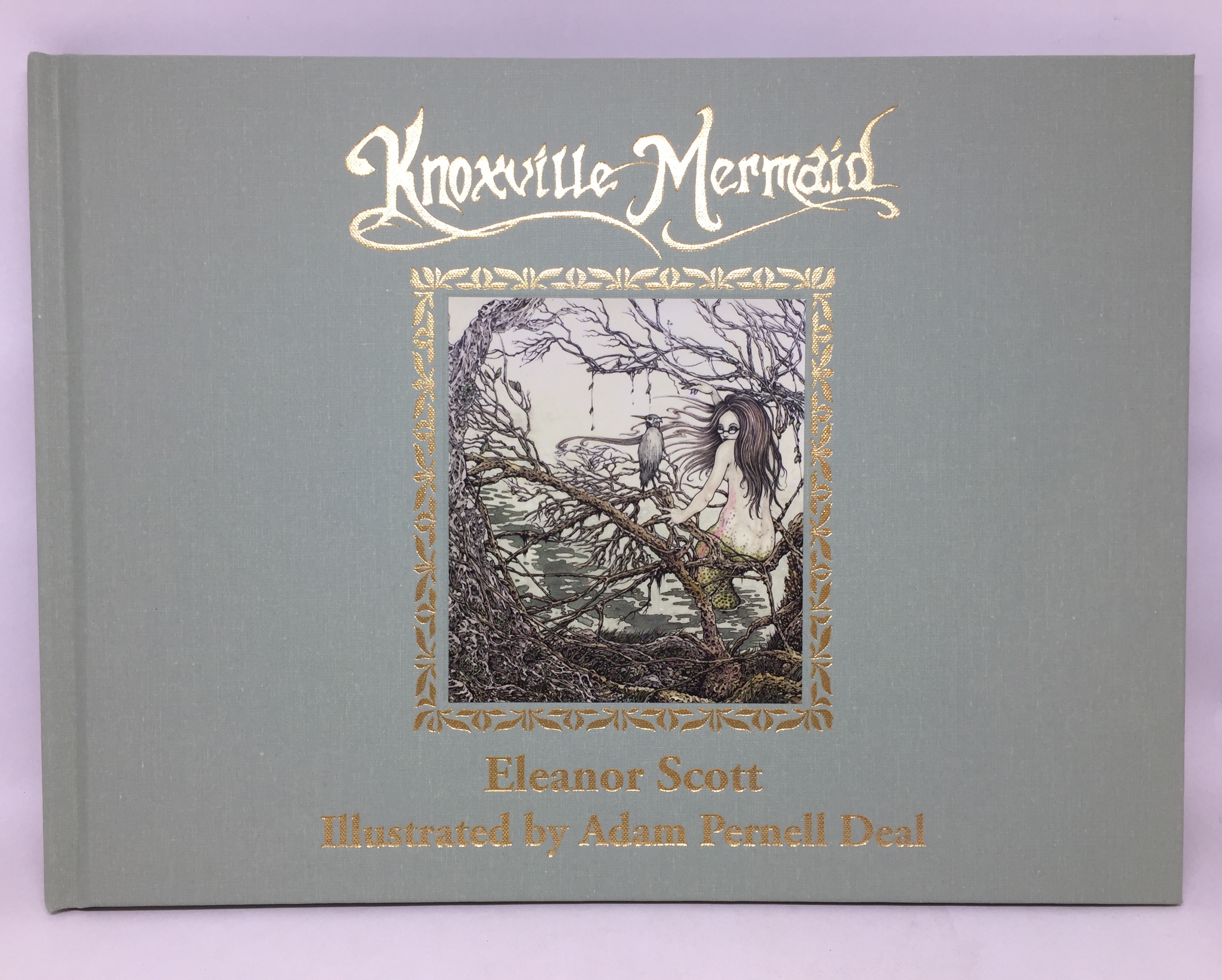 Eleanor Scott used to write beguiling columns for Metro Pulse and the Knoxville Mercury about urban nature, the places and ways that East Tennessee geology, flora and fauna interact with Knoxville’s milltown corners and quarries. This enchanting picture book, a labor of love by Scott and her partner Adam Pernell Deal, pays similar attention to one feature of that landscape — our creeks and waterways — and imagines what (and who) else we may share it with.

Here’s how Scott describes it: “The kernel of Knoxville Mermaid is in the stories I made up for my daughters when they were toddlers and we spent hours walking down by First Creek. If you say to a three-year-old, ‘Look, do you see the mermaid?’ they will always answer, ‘Yes,’ and maybe they really do! Dirty water. Kudzu. Graffiti. Mermaids. Sounds like Knoxville to me.

“Knoxville Mermaid trains the eye to look for magic and mystery as we follow the mermaid through the littered, overgrown corridors of the city. Again and again she escapes efforts to capture her until a flood lands her in the hands of a young boy. What does it mean to possess real magic?

“When I wrote my columns for Metro Pulse and The Knoxville Mercury, I was drawn to very small untold stories about marginal people and places on the edges of the city. The creeks are sublime entities winding through our neighborhoods like giant serpents, mostly overlooked by we humans, polluted and compromised but full of tiny lives. There really are otters living in Third Creek behind the abandoned Wal-Mart, and to people like me who grew up in the years when otters were basically extinct in Tennessee, that sounds nearly as improbable as mermaids.

“My partner Adam Pernell Deal illustrated Knoxville Mermaid in his signature mediums — watercolor and black ink. Adam is a prolific self-taught artist better known for his horror art. His enigmatic illustrations offer an alternative view of Knoxville’s urban waterways — places of darkness and unexpected light. Knoxville Mermaid is a love letter to our city, its small, unseen lives, the feral beauty and ungraspable mystery of survivors.”

Knoxville Mermaid is a 400-word, 32-page hardcover picture book, published in a limited run of 1,000 signed copies. It is for sale at The Book Eddy (where you can buy it from Scott herself), Union Avenue Books, and Three Rivers Market. $30.

Over the past two decades, Tim and Susan Bauer Lee have become so central to Knoxville’s local music scene that it’s hard to remember a time when we didn’t have them. A few years ago, after releasing five albums as two-thirds of the Tim Lee 3, the husband-and-wife team decided to turn their duo side project Bark into their musical focus. This year they released the second full-length Bark album, Terminal Everything, and as the title suggests it finds them contemplative, candid about aging and loss, and as tuneful as ever.

Tim writes, “To our minds, Terminal Everything is a slight departure for Bark. In addition to the fact that we’ve grown as a recording entity (which is pretty different for a duo versus a larger combo), the subject matter on this album is more personal.

“These 10 songs were all written in the aftermath of the loss of Susan’s dad, my mom, some close friends, and longtime canine companions. We opted to take a fairly unflinching approach to documenting that time and we like to think it comes through in the songs. Additionally, Susan designed the cover and we printed it by hand at Striped Light Letterpress, which gives it more of a personal touch. The whole project was quite cathartic and satisfying.”

You can buy Terminal Everything locally at Lost & Found Records, Raven Records & Rarities and Magnolia Records. It’s also available as an online purchase from Bandcamp and Apple Music, and you can stream it on Spotify. 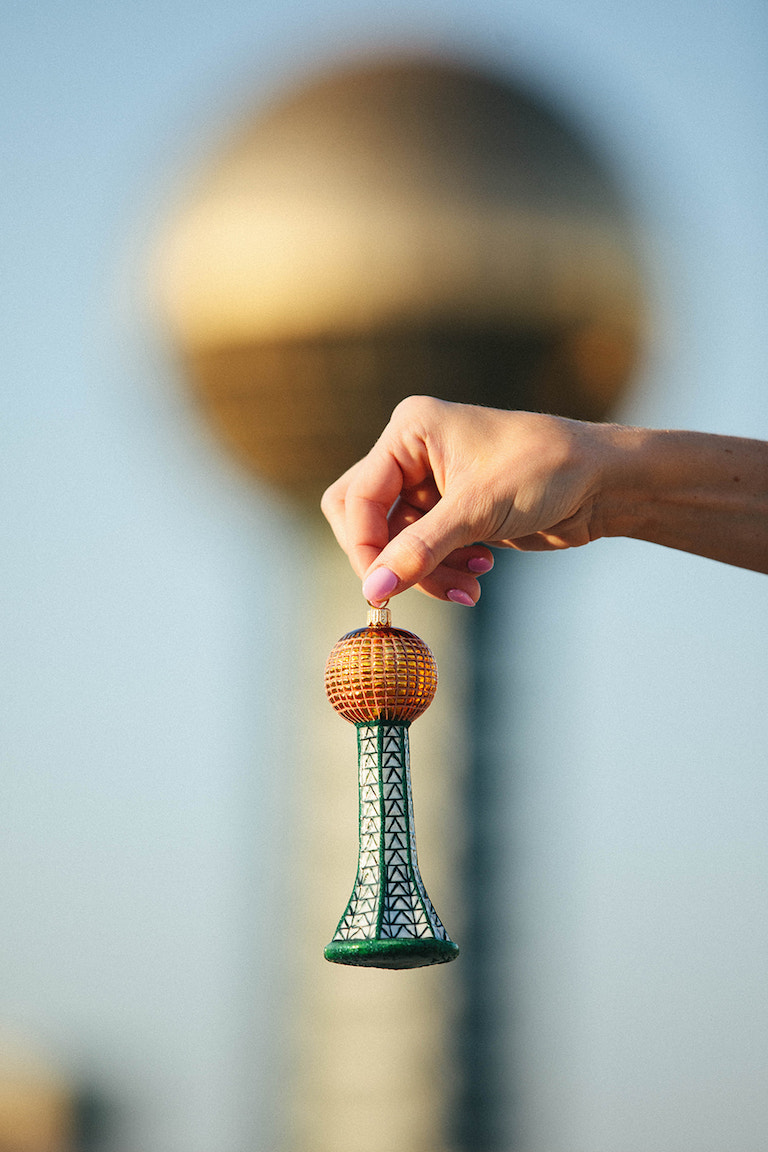 What could make for a more Knoxville Christmas than your very own Sunsphere dangling from the tree? Visit Knoxville teamed up with local couple Guinn and Derek Boyce and Knoxville-based Joy to the World Collectibles to produce these limited-edition glass replicas of our favorite golden globe. A portion of proceeds from each sale go to the recently established Sunsphere Fund, created by Visit Knoxville to support ongoing maintenance of the 37-year-old World’s Fair icon.

On the fund’s website, the Boyces — Knoxville natives and graduates of the Webb School  — tell the story of the ornament:

“While taking a stroll on a cold November day, a glimmer of the Sunsphere caught our eye. As we got closer we could easily see that it was covered in dirt and some of the windows appeared to be completely discolored.

“It was disappointing to see our iconic city symbol in distress. And it stayed like this for an extended period of time. It didn’t reflect the energy and new life that continues to take over Downtown Knoxville.

“We have a holiday tradition of adding a special ornament to our collection every year.  But not just any ornament … it has to be from a special place or have sentimental meaning to us in some way. It dawned on us that a Sunsphere ornament would be the perfect sentimental sparkly addition to our tree. And surely purchasing one would help it in some way too!

“For three years we searched for a beautiful glass ornament of the Sunsphere.  We couldn’t even find a simple replica. That’s when we decided to create our own. The purpose of the Sunsphere ornament was to give back to the city that we love so much and to create something Knoxvillians will cherish forever.”

The Sunsphere Ornament is available at the Knoxville Visitors Center Gift Shop or online at knoxsunfund.com. $55.

East Tennessee Newsmakers: Where Are They Now?
By Georgiana Vines 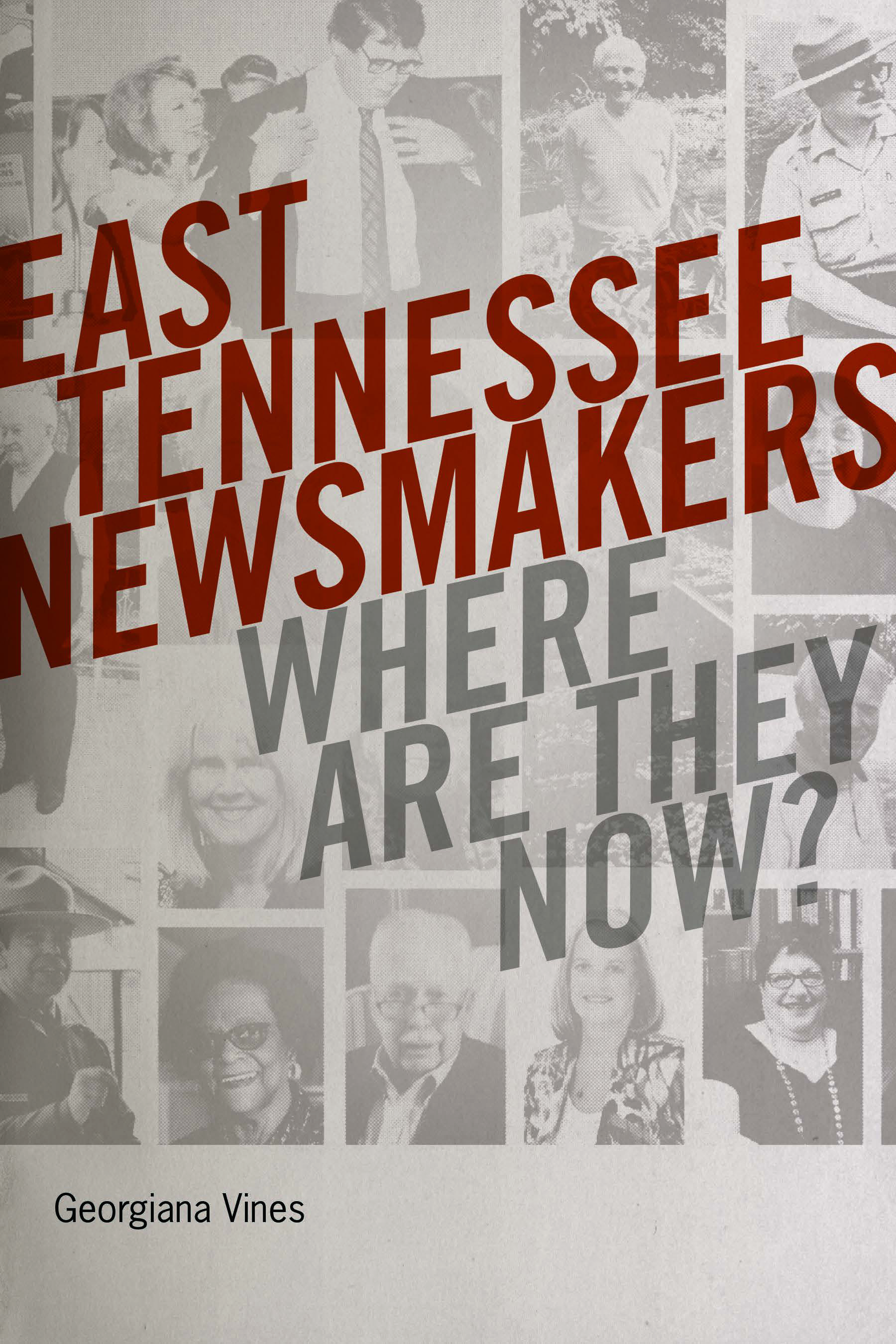 Georgiana Vines has spent decades in journalism, many of them here in Knoxville. Vines, who retired from full-time service at the News Sentinel but still writes a local politics column for the paper, has compiled a book based on her long-running “Where Are They Now?” feature.

She writes, “A friend, Fran Scheid, had been after me for several years to compile the stories I had done for the News Sentinel’s Sunday Life section on ‘Where Are They Now?’ and put them in a book. Personalities profiled were, for the most part, former newsmakers who had retired or left Knoxville to continue in their careers.

“The University of Tennessee Press is across the street from where I live so I went over to talk with editors about the idea. They liked it and wanted me to include stories/columns I had done on the Great Smoky Mountains National Park, because of the park’s importance to the area. So I broadened the topics from just those that had appeared in the Life section to others, such as political figures, which fit the theme. I didn’t want to leave the stories as they had been published so it made sense to update them. Most are better because this decision was made. Several people had died so I also had to incorporate that into the stories, but did it in such a way that the information is included but it’s not the focus of the story.”

It is available at Union Ave Books, https://unionavebooks.indielite.org/ or through the publisher, University of Tennessee Press, www.utpress.org. $29.95. 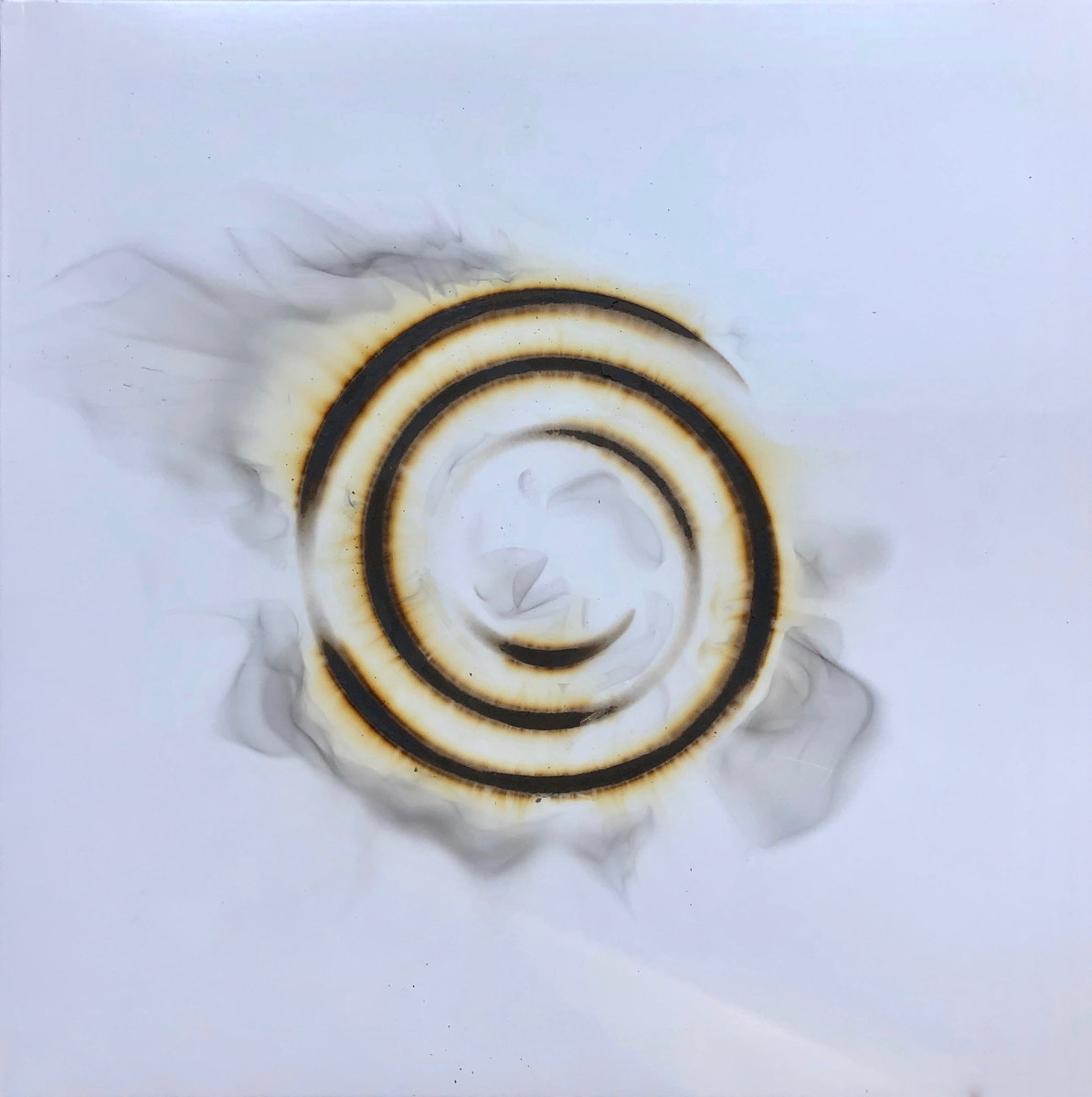 The unlikeliest local reissue of 2019 is this two-track improv-rock gem from long-vanished local combo Picks & Lighters. Recorded live by husband-and-wife Steve and Mary Ann Pritchard and their roommate Bill Warden in the front room of their Knoxville home one day during the summer of 1997, TVA/Starvation was originally released in a limited edition of 200 vinyl copies. The cover designs were created by placing each album jacket on a stove burner.

One fan of the improvised music locked in those grooves — sometimes rootsy, sometimes ephemeral, sometimes thundering — was former Knoxvillian (and another former Metro Pulse writer) Lee Gardner. Although he long ago decamped to Baltimore, where he was editor of the city’s alt-weekly before becoming a staff writer for the Chronicle of Higher Education, Gardner has retained a fondness for his East Tennessee roots.

So when he realized a long-harbored ambition of creating his own indie label earlier this year, VG+ Records, a Picks & Lighters reissue was the first project he thought of — complete with hand-burned sleeves.

Gardner writes, “As for why I did it, in addition to the East Tennessee connection, there's something so personal and unstudied about the music, and that carries through the cover and the rest of it. Like Byron Coley says, ‘music made by humans.’ A whole object made by humans. It seemed like it deserved another chance, and it seemed like the perfect project to launch a small label with similarly human goals.”

And by the way, the next VG+ release comes out this Friday: Prism Mirror Lens by pedal-steel guitarist Susan Alcorn and saxophonist Philip Greenlief. Although the musicians have no Knoxville connection, Alcorn has performed here at the Big Ears Festival.

TVA/Starvation is available locally at Raven Records & Rarities and you can also order it online.

And check out The Maker City Directory for a browsable listing of local artisans, craftspeople and creative producers of all kinds.

CORRECTION: The hours of hte Market Square Holiday Market have been corrected to 10 a.m.-2 p.m.